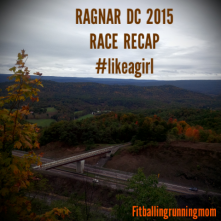 It is hard to believe that it was 7 days ago that I completed Ragnar DC!! What better way to continue to celebrate this accomplishment than to finish of my re-cap. If you missed Day 1 and/or Day 2 Part I you can find them here and here.

As I type this up, I am recovering and resting as I have just finished the Inaugural Rock and Roll Brooklyn half and have some great things to share! Re-Cap coming soon!

After only an hour of sleep, we headed out or Derwood to Germantown (about a 20 minute ride). Remember that Caramel Machiatto that I was saving for the morning….well it got thrown out when some of the girls organized the van in the morning :(. In hindsight, I was glad I didn’t drink it because the girls who did where having some tummy issues in the morning.  Bothering them enough that Carrie was contemplating not running her final leg. Once we got to Germantown, we realized  that we probably had another hour or so-so we used that time to get another cat nap in the car.  Carrie went to the first-aid tent and got some Pepto.  The cat nap and the Pepto, helped her to feel better and semi-ready to run her final leg. She let us know that she would try her best to start and to finish. We let her know to do her best and we would support her no matter what.

Once again Alanna did an amazing job completing her leg and ran in strong to finish off and hand off to Carrie (runner#1 in van #1).  It was cold and rainy. Poor Alanna was literally freezing and not able to feel her fingers :(.  Carrie was off and gave it her all. Less than a mile in she was shedding a layer and we knew this meant that she was feeling better and ready to finish strong! She continued and rocked her 4.2 moderate miles like a champ!!

Without planning it, at every exchange we gave hugs to each other.  It was rather emotional and perfectly fitting! Carrie’s exchange to Elizabeth.

Elizabeth finished strong completing her 2.8 easy miles. Coming in with a smile.  I don’t have a picture of her hug and exchange with Megan. 😦 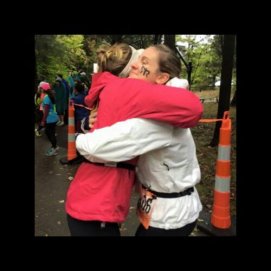 I was off for 8.6 hard miles.  I think it was labeled hard only because of the distance.  There were rolling hills with one big hill on the run but most of it was flat and scenic.  I felt pretty good throughout the run.

That guy in the gray would ‘kill’ me later in the run-lol!

One of the other things that we did as we came into our last legs was to chant each other’s name.  As I ran in, the crowd was pretty large as this exchange had both vans here.  As I ran in, the entire crowd started chanting my name following after my team-mates. It was actually a pretty awesome feeling.

Me coming in strong to exchange with Stacey. I don’t think she was prepared for my hug-lol! 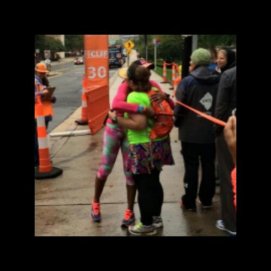 Van #1 also sent last leg selfies to each other. This was kind of cute too.  I got the award for taking mine with the 1 mile marker-ha! 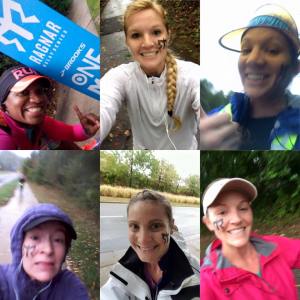 As I was walking through the parking lot heading to our van, I heard someone call out my name. I looked around and was happy and surprised to see Sue! Hey girl!! I have to say, I think we look pretty damn good with little to no sleep.

We chit-chatted for a bit and then said our good-byes.  It was so nice to meet one of my blogging friends :)! I am glad she saw me.

Van #1 headed to Carrie’s boyfriend’s house that was about 20 minutes away for a hot shower and another hot meal.  I have to say the boyfriend’s for van #1 were CLUTCH this weekend!!! We rested for a bit and then headed to the Navy Yard to wait for Alanna and the rest of van #2.  We totally mis-calculated how long it would take van #2 to complete their miles and ended up waiting over almost 3 hour-much of that in the cold and rain…uugh! Thank goodness we found a little corner in a nearby Starbucks.  Alanna was a little late coming in as part of her run took her through Georgetown which had way too many traffic light (a compliant, I heard from many runners who ran the last leg) and totally slowed her down.  She came in strong as usual and we joined her in the final bridge to the finish!

I have to say  completing Ragnar DC was one of the most challenging, most rewarding and most awesome experiences of my life since giving birth to my children.

When I agreed to join the Girls on the Run-Montgomery County #likeagirl charity team for Ragnar DC, I had NO idea what I was getting myself into. I agreed to spend over nearly 36 hours with ladies that I didn’t know except for 1 (and she wasn’t even going to be in my van.)

Well let me tell you, Ragnar DC with the ladies of #likeagirl was an experience I will never forget!!

With threats of a hurricane and miserable weather, we shook it off, said ‘bring it on’ and found our #innerwild!!

We ran in the rain and the wind, in the early morning, during the day, into and throughout the night, through the woods, through quaint towns, up, down and over hills and mountains and through the city al on limited sleep and pure adrenaline!

I want to thank the ladies of #likeagirl for an amazing weekend and their support as I ran my 18.1 miles ( my longest distance to date!).

Thank you Brytni, Britny​, Megan​, Elizabeth​,Stacy​, Alanna​, Alexis​, Carrie​, Judy and Lisa-you ladies are amazing and  I honored to have been a member of the #likeagirl Ragnar DC team!

If you have never done a Ragnar race, I would highly recommend it.  I have not stop thinking about it and have yet to let go of the Ragnar high!!

Would you consider a Ragnar race? Who would you ask to run with you? 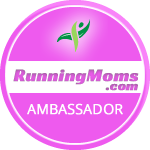